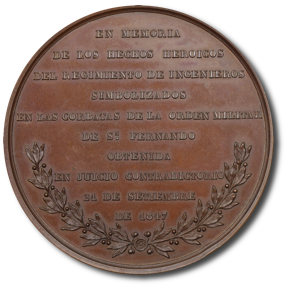 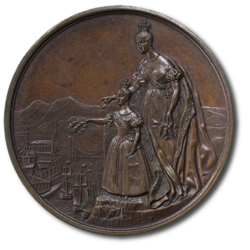 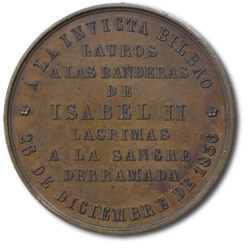 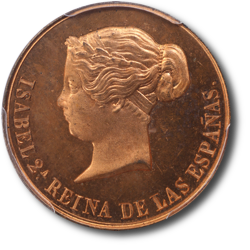 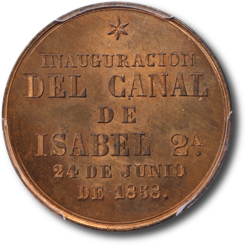 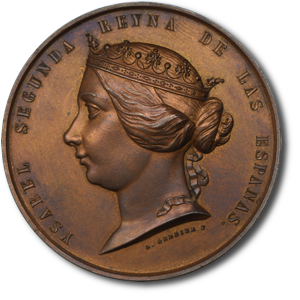 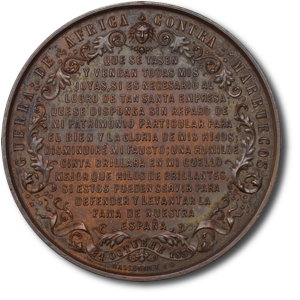 This medal was issued to recognize the city of Bilbao’s bravery and loyalty to Queen Isabel II during the first Carlist War. The defenders of the city repelled attacks of three separate Carlist commanders and ultimately overtook the Carlist’s camp. This medal depicts the 6 year old queen and her mother, María Cristina, extending laurels to the city of Bilbao. The inscription on the reverse translates: Laurels for the banners of Isabel II, tears for the blood shed. The surrounding legend: The undefeated Bilbao • December 25 1836.

This medal was issued in a 50mm diameter and 41mm diameter. The piece pictured above is of the 41mm variety. Minted in Madrid.

A chocolate mahogany tone characterizes the obverse while the reverse has an equally pleasing lighter tone.

This is a military service award recognizing the loyalty and courage of the Engineers Regiment and granting them the right to display the ribbon of the Military Order of San Fernando, the highest military award for bravery.

The inscription on the reverse translates: IN MEMORY OF THE HEROIC DEEDS OF THE ENGINEERS REGIMENT SYMBOLIZED IN THE RIBBONS OF THE ORDER OF SAN FERNANDO OBTAINED IN COMBAT 21 SEPTEMBER 1847

Although the regiment had already earned the ribbon during the second Carlist War in 1847, an award ceremony was held after the war on 15 November 1850 at which Queen Isabel II herself additionally presented this medal to those recipients. Thus, the actual date of issue is likely 1850.

This medal was engraved by Joseph Arnold Pingret and, as indicated by the edge marks, minted at the Monnaie de Paris.

A few rim nicks and light marks on the obverse are overwhelmed by the light chocolate original surfaces of this beautiful medal.

This medal commemorates the inauguration of the Canal de Isabel II which delivers water from the Lozoya River into Madrid. In 1848 engineers Juan Rafo and Juan de Ribera approached Juan Bravo Murillo, the Minister of Commerce, Education, and Public Works with plans to construct a canal from the Lozoya River to Madrid. With Murillo’s recommendation the government of Isabel II issued a Royal Decree in 1848 directing them to begin work on the project. In 1851 the King consort, Francisco, set the first stone for the canal that would eventually extend 70km from Lozoya River to Madrid. In 1858 a ceremony was held to celebrate the arrival of water from the Lozoya River to San Bernardo street in Madrid. Today, the Canal de Isabel II continues to provide water service to 21st century Spain.

This "Laureate Head Left - no ribbon design" first appeared on pattern gold 100 reales and, facing right, silver 20 reales in 1855. Although a different design ultimately prevailed for those regular issue coins, the design appeared again on this medal issued by the Madrid mint in silver and copper.

Lustrous mint frost glows on the entire bust surrounded by glassy fields with very few marks on the obverse. The reverse has some mottled toning with considerable luster and very few blemishes. The finest example seen by this author.

This translates roughly to: I would price and sell all my jewels if necessary to achieve our holy quest and arrange that without remedy from my own heritage for the good and glory of my children; my splendor diminished, a humble cord would shine on my neck more brightly than strings of diamonds if it may serve to defend and lift the fame of our Spain.

Louis Adolphe Gerbier engraved the obverse and Francois Massonet designed the reverse. Based on these artists, one would expect this to be a Monnaie de Paris issue. However, there are no edge markings to support such a conclusion. It is likely that these medals were minted at Madrid or possibly Barcelona.

Very attractive original coppery toning flows over the entire surface of this medal. Beautiful multicolored toning underlies the central inscription on the reverse. The finest example seen by this author. 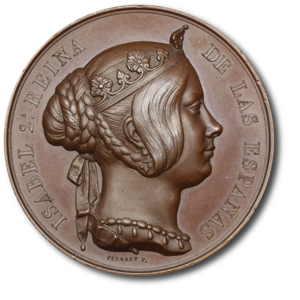